If you tell fish stories, you likely know the rules. One, it has to be true, sort of. Two, exaggeration is permitted. No, it’s expected. Three, if you take time to take a photo you can save time later on the exaggeration.

Like you, I have stories about the big one that got away, or about the time we slayed ‘em (Grandpa’s term for a massive catch), or when a sudden storm or a fall into the water or a broken outboard almost killed us all.

However, my personal favorites are stories about catching fish twice.

Just below Tunari peak is an icy cold, crystalline lake reached by a winding road so treacherous that it inspires unpleasant dreams. Until a few years ago, the lake held enough feisty rainbows to lure us up there every couple months. Each trip the fish got bigger and the road more treacherous.

Eventually, the fish got scarce. Once or twice we even got skunked. My enthusiasm cooled for navigating the winding road. Then one December I decided to take Ryan and Steve, two buddies new to Andes trout fishing, up there for a break-in session. I didn’t expect much, based on disappointing results from prior trips. Assuming that this would be nothing more than a practice session for Ryan and Steve, I left the landing net in the truck.

Sure enough, we had zippo luck all morning. Though they didn’t say so, I think Steve and Ryan were wondering why I had dragged them over that treacherous road just to practice. It was embarrassing. 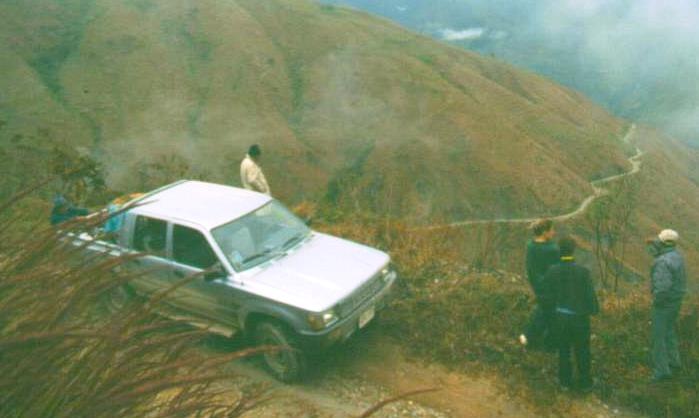 After lunch I tied on a new diving spoon. I had not used one like it before and figured I could use some practice. That’s an understatement. On the second cast I snagged the bottom of the lake--or so I thought. When I tugged to unsnag the spoon the lake bottom started moving away, slowly but deliberately. I could not hold it.

Suddenly a huge trout broke the surface. My pulse kicked up and my knees started trembling. The fight was on. Steve saw it and came running to offer his help. I should have sent him straight away to the truck to fetch the landing net, but didn’t. I figured I could play the trout to exhaustion, coax him to shore and have Steve pull him out of the lake by the gills.

The plan almost worked. After 25 minutes I had maneuvered the weary fish next to the narrow rock ledge where Steve and I were standing, a ledge that dropped off abruptly into a six feet of icy, crystalline water. I told Steve to grab the trout.

Onliest thing was, my instructions that day had not included pointers on pulling big trout barehanded from the water. Steve had caught pan size brookies and rainbows back home in Indiana, but had never confronted a trout of these proportions. He took the head in one hand, the tail in the other and hoisted. The limp line cut itself on the jagged rock ledge just at the moment the slippery fish squirmed out of Steve’s hands and back into the lake.

For a whole minute we watched the monster lying inert at the bottom of six feet of icy crystalline water, my expensive spoon still dangling from one lip. Steve declared he would retrieve it for me and started to peel off his clothes. Lucky for him the trout regained consciousness about then and sluggishly swam off into the deep.

Steve was mortified at the tragedy and apologized profusely. Poor guy. If only he knew that such mortification wears off in a mere 25 years or so, he would not have taken it so hard. (See Blog 3, Decent fishing)

I was disappointed, but not to the point of despair. “This is not going to end like this,” I said to myself, gritting my teeth and setting my jaw.

The next few nights were filled with unpleasant dreams that retraced the treacherous journey up the winding road and replayed the tragic moment when the big one got away. Finally I called Ryan. “Wanna go back to Tunari?” I said. “We will be sure to take the landing net this time.”

A week later, Ryan and I spent another fruitless morning casting into crystalline water. Only on this day a heavy fog lay over the lake, chilling our bones and dampening our spirits. Just after lunch I decided we might as well call it a day and shouted to Ryan, who had disappeared into the fog on the opposite shore.

He did not answer, so I shouted again. “Ryan, Ryyaaan!”

Wham! A monster trout hit my spinner and seconds later broke the surface. The next 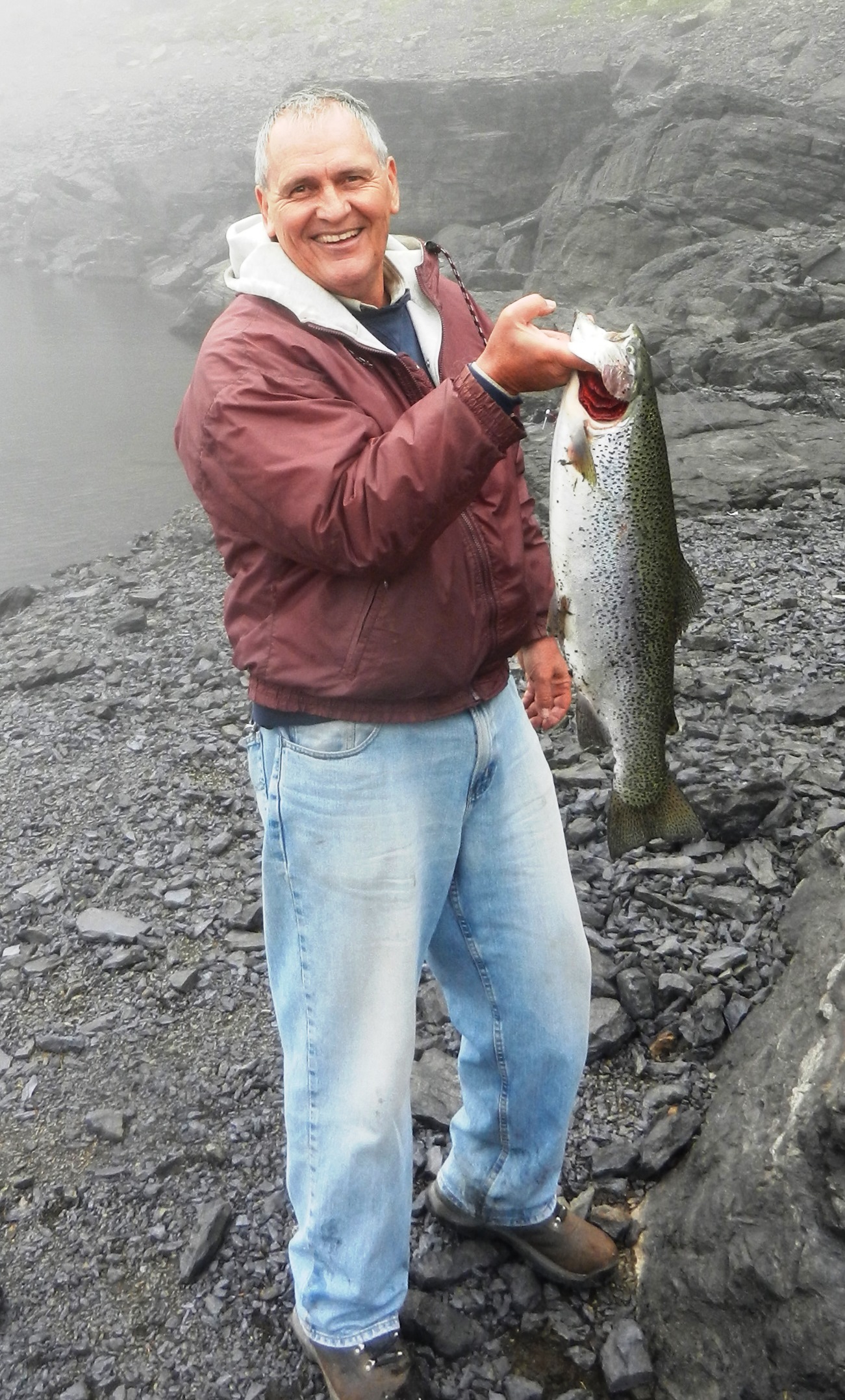 shout for Ryan choked in my throat. The fight was on and this time I had a landing net! Onliest thing was, Ryan had the net on the other side of the lake. Could he have heard me?

He did. Within minutes he appeared out of the fog and sprinted up, landing net at ready. It took another 25 minutes to play that fish to exhaustion and coax it to shore, but this time there was no escape. Ryan did the honors while I giggled like a schoolgirl. When the monster was safely tucked into the net, we both pumped fists. If Ryan was happy, I felt downright vindicated for dragging him over that treacherous road a second time for the chance to settle a score.

I should be ashamed to tell you my other story about twice-caught trout, except that it is, let’s say, unforgettable.

Roy and I were once invited to fish a pair of lakes in the Ayopaya province. Quechua campesinos had stocked them with rainbow fingerlings two years prior and were set to harvest the mature fish for sale in the city. They graciously gave us dibs on the fish, provided we pay them a per-kilo fee.

The lakes were chock full of two-pound trout. It seemed we hooked one every other cast. The fish were so thick I reached my bag limit in two hours. Then it was pure catch and release, something I rarely practice. (See blog 5, Meat fisherman).

The second day I started using two poles at once. Except when fishing off bridges or piers in saltwater, this technique is pure bush league. Among respectable trout anglers, it’s downright despicable.

But never mind. I was about to be justly humiliated for stooping to bush league fishing.

I rigged up one rod with a nightcrawler and wedged it between a couple rocks on the shore while I continued to cast my spinner bait with another. I had strayed down shore some 50 feet when suddenly a trout hit the crawler, hard. I saw the untended rod tip bend, then bend some more. I scrambled back there as fast as I could but was still several strides away when the rod tore loose from the rocks and zipped into the lake.

I was upset, of course, but not as much as the Quechua campesinos. In their economy, the value of a rod and reel equaled that of an outboard motor in ours. “Don’t worry, we can help you!” they exclaimed. “We have a rubber boat and will search for your pole. We just have to pump the boat up first.” Right.

Just then, the trout broke water about 50 feet offshore. By golly, he was still hooked. I calculated the angle, cast my spinner and let it drop. A slow retrieve hooked the line on the submerged pole. I gently reeled it in until both rod and reel surfaced and I could grab the handle.

A few minutes later, Roy had the trout in the landing net and I was pumping a fist. The campesinos oohed and awed about my good fortune, while Roy muttered cheeky wisecracks about cheating fate. I admit I cheated, and that was the last time I did. I reckoned I best not press my luck. No fisherman was ever more undeserving than I of a second chance. 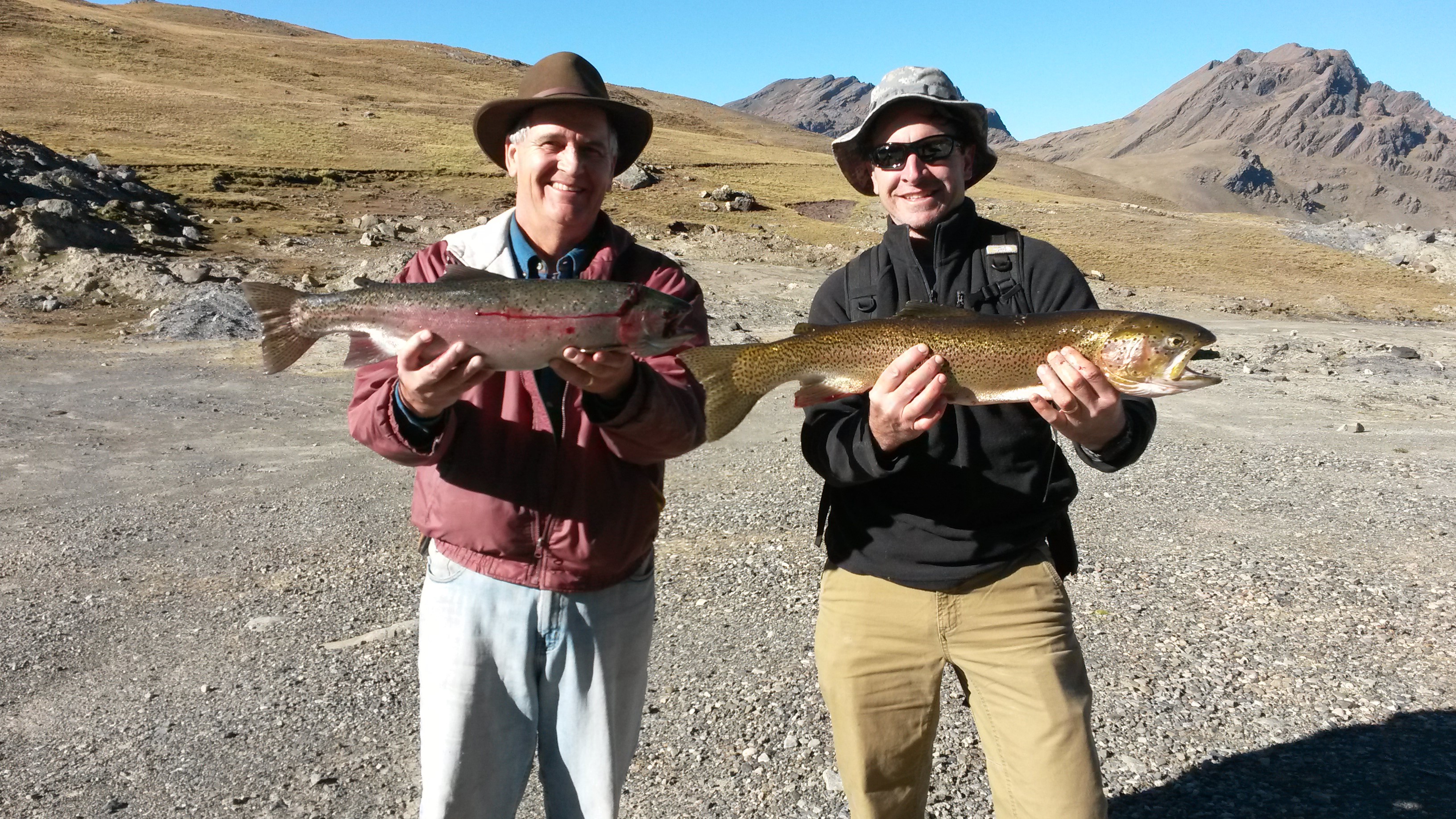 I figure the Bible records more accounts of second chances than any other book. Talk about cheating fate, you will find people in there who literally get away with murder. Who? Well, King David, for one.

Then you have Saint Peter. In the middle of a dark night, Jesus found himself standing before corrupt politicians who were about to illegally condemn him to a painful death. His best friend was nearby, watching. But instead of stepping forward to speak up on Jesus’ behalf, Peter committed the lowest of all dirty tricks. He turned his back and denied he even knew the man. Not once, but three times.

And how about Saint Paul? Before he became the world’s first missionary, he was a sworn enemy of Jesus. In fact, he describes himself as the “foremost of sinners” because he didn’t merely reject Jesus’ claim to be the Messiah, he ruthlessly persecuted anybody who believed Him to be so. Saul, as he was called in his first life, was dead set on stamping out Jesus’ name and legacy.

Nevertheless, Jesus gave them both a second chance. The rest, as they say, is history.

The Bible has a unique word for second chances. It’s “grace.” Think of grace as a favor you absolutely don’t deserve, a gift you could never ever repay. There is no way to earn grace, there is no way to bribe God into granting it. It is totally free, abundant and amazing.

All you have to do to get a second chance with God is to admit you blew it the first time around. Come clean about your cheating. Tell Him what He already knows about that dirty little secret. Then just honestly ask Him to forgive you.

You do that, and the rest is history. 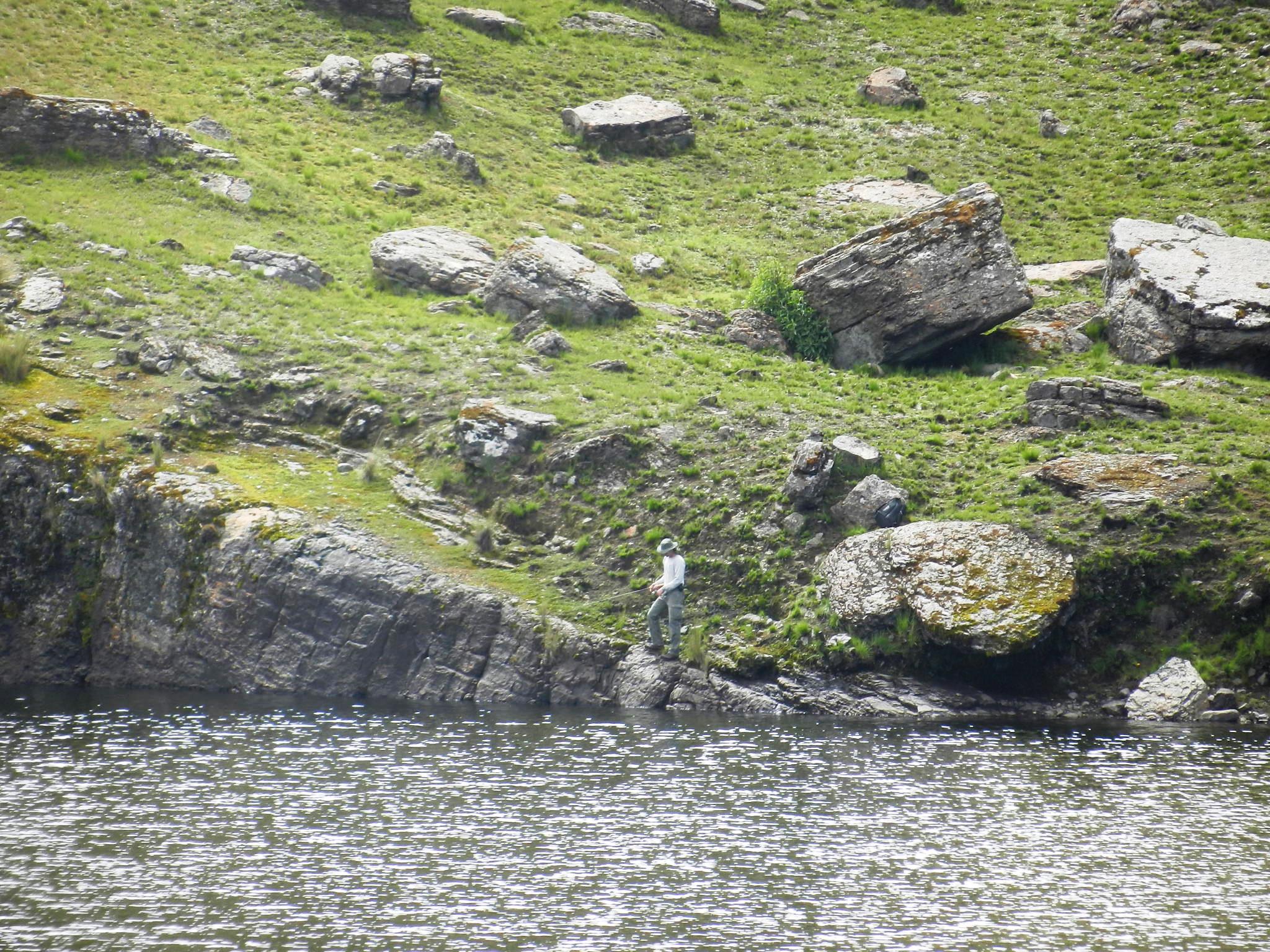 Next time: Where there is no bridge