Like most fishermen, my buddies and I rise early to get out of town before traffic and arrive at the fishing holes around sunrise. Few experiences gives one as much relaxed satisfaction as the first cast into a calm lake or gurgling stream in the hush of a sunny morning. Should waterfowl hoot in the distance or a hawk circle lazily overhead, it only enhances the pleasant feeling that all is right with the world and one is exactly where one ought to be. 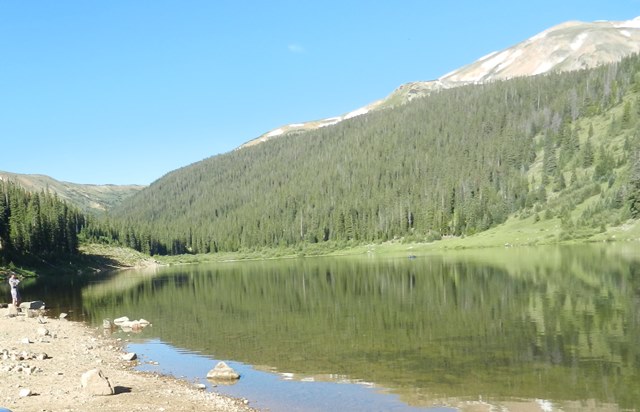 It’s mornings like this that surely inspired the old adage, “My worst day fishing is better than my best day at work.”

Yet, there is something wrong with this tranquil picture. Seriously wrong, according to my friend Bentley. He thinks the likelihood that you will hook a trout on a calm morning with the sun glinting off crystalline water is next to nil. Climatic conditions that favor relaxation, he says, ruin the fishing. On mornings like that, you might as well be at work.

If you want to catch fish, he says, hope for a stiff wind come afternoon. The colder and stiffer the better. He hopes for a wind that churns the lake surface into a hard chop, so that the sun glinting off his shiny bait glints even more glaringly and provokes fish to strike with fervor.

No sun? Better yet, says Bentley. Trout have the keenest eyesight of the sportfish genus and can easily spot prowling predators on the bank of a crystalline lake. But choppy water under a gray sky literally blinds them to the danger of fishermen.

Having fished numerous times with Bentley, I can attest that he is on to something here. More than once we have circled an entire mountain lake on a calm, sunny morning with only a tepid strike or two. Then a sharp wind rises after lunch, menacing clouds roll in, the temperature plummets and the fish go ballistic. We limit out within an hour or two and head home early. 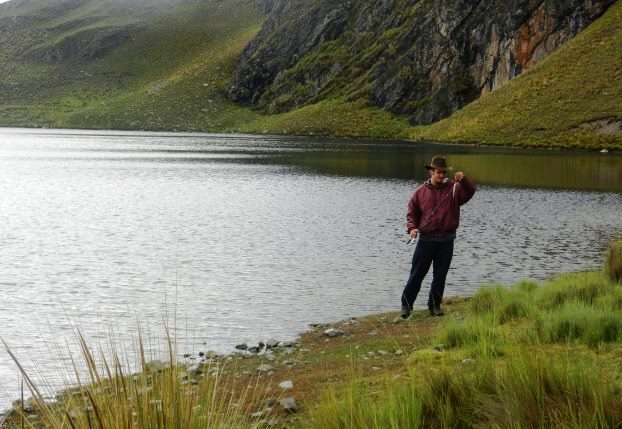 This has happened often enough that when the fishing action is poor, I will comment to a buddy, “What we need right now is a Bentley afternoon.”

By far the most memorable Bentley afternoon I spent in the Andes did not involve fishing, however. It had to do with climbing a mountain and driving off-road.

The mountain in question was Tunari. Most foreigners who reside in Cochabamba have climbed it. Even many international visitors scale the summit, usually after spending a fortnight in the city to acclimate to altitude.

This mountain draws climbers largely due to its height. At around 17,000 feet, Tunari is the highest peak in the department (state) of Cochabamba. It is taller by a couple thousand feet than the highest peaks in the Colorado Rockies or European Alps, so a climber earns certain bragging rights if he or she reaches the summit.

It was the second or third time that I summited Tunari that I got our party into serious trouble.

We had risen early to get out of town before traffic. Just after sunrise we turned off the cobblestone road that rises from the valley and onto a dirt track that leads to Tunari’s upper slopes. The dirt track eventually petered out, so we drove the last mile across grassy fields to the base of the peak. It was late June, dead winter in Bolivia, and the grassy fields were frozen solid after a cold winter night. It was a piece of cake. 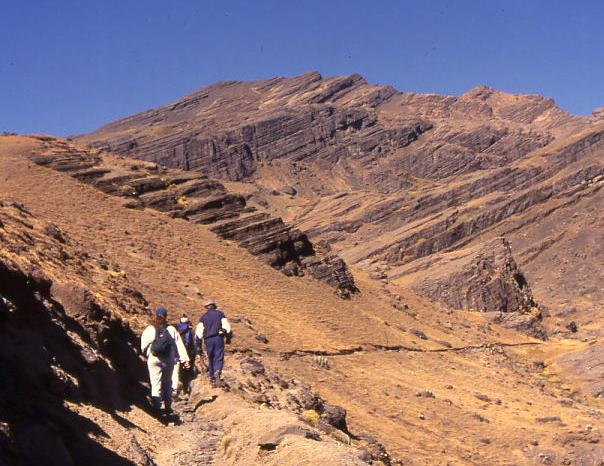 The climb went well, too. By 11 a.m. we were heading down from the summit, exhilarated by our success and shucking off layers of clothing to enjoy the sun now warming the mountain air. Weary but happy, we piled into my 4-wheel-drive and headed back across the grassy fields.

I blame euphoria for the mistakes that got us into trouble. The first error I made was failing to manually lock the 4WD wheel hubs on my SUV. That meant I was driving with two-wheel traction only.

Second, I did not ask a passenger to get out and walk ahead of the vehicle to check the ground for hazards. I had learned to diligently observe this rule when driving off-road in the Andes, but it did not occur to me that day. After all, we had sailed across the grassy fields on rock solid ground going in. Why worry?

Despite my carelessness, we almost made it back to the dirt track. Almost. We were still chatting cheerily about conquering Tunari when the SUV’s front wheels abruptly sank a foot in the ground and the vehicle lurched to a halt. I shifted into 4WD drive and gunned it. The SUV jerked forward about six inches before the back wheels sank a foot into the ground, as well.

No worries, I thought. I’ve been in this kind of mess before. The 4WD will get us out. I threw the car in reverse and gunned it again. All four wheels sank another six inches. That’s when it dawned on me that I had forgotten to lock the wheel hubs. My maneuvers had only succeeded in planting the SUV as far as possible in the sucking mud.

I got out to lock the wheel hubs and discovered that we were sitting in the middle of a spring-fed mud hole, one that had been frozen solid when we drove over it that morning but had since thawed out in the warm sun. This particular mud hole had no bottom. Liquid sludge encased the SUV up to the wheel wells.

I asked my passengers to descend, hoping that with less weight and several hands pushing, the SUV could be extracted. Nothing doing. My passengers were John, his wife Leonie, Norberto, his wife Julie, and Johana. We literally did not have enough manpower to accomplish an extraction of this magnitude.

As we pondered our dilemma, I confronted another mistake. I had not brought a shovel on the trip, something any responsible off-roader always does. We were going to have to do some digging, make that lots of digging, and it was going to go very slowly by hand.

John, Norberto and I determined that the only way to get through the mud hole was to dig out a space under the rear end, get my spare tire in there and wedge the jack between it and the axle. We could then raise the rear tires a few inches out of the sucking mud, gun the engine, pop the clutch and let the front wheels jerk the SUV ahead a foot or two before it sank back into the bottomless mud.

If you are getting bored reading this, you should have been there. After several hours of boredom, in fact, Leonie suggested that the ladies might do well to start walking down the mountain. It was now late in the afternoon and sundown approached. 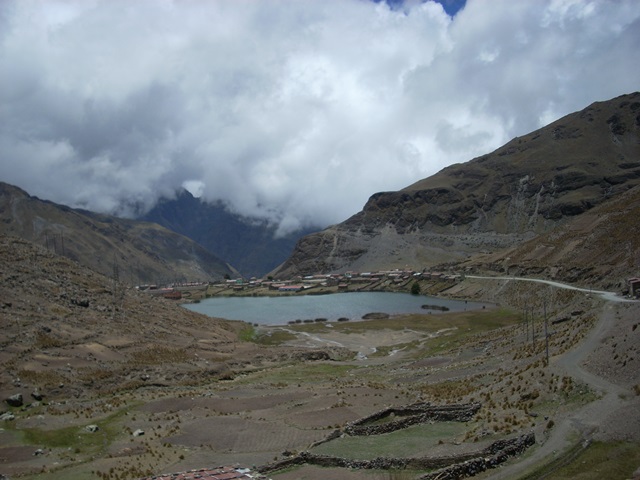 That was when I faced up to yet another mistake. I had failed to bring along ponchos, wool blankets, sleeping bags and other warm gear, in case we had to spend a night up there. This was by far the most serious of my errors. An incident that happened some weeks prior illustrates why.

A party was crossing the Uyuni Salt Flats, which lie at roughly the same altitude as the upper slopes of Tunari. Their aged car stalled and would not restart. Sundown approached and the party was without warm gear to get them through the night. The driver started walking to town.

He never made it. Passersby discovered his frozen body next morning and retraced his steps to the stalled vehicle, where they discovered his passengers dead from exposure.

I have no doubt that this same fate would have overtaken us, but for the grace of God. His grace appeared in the person of Bentley and his two sons, who happened to be home on college vacation. The three had gone ice climbing that day and were headed home on the cobblestone road when they came upon our trio of ladies heading down the mountain.

“Dad, I think that is our friend Johana,” one of the Bentley boys said. “What in the world is she doing up here on foot?” They stopped and picked up the women, who told them of our predicament. The Bentleys immediately turned around.

When they drove up to the mud hole, I knew we were saved. Sure enough, with Bentley, his two sons, and all the rest of our party pushing, we managed to extract the SUV on first go. I can’t recall if I was laughing or crying by then, but I do remember the overwhelming relief. Not only had my passengers been spared the serious consequences of my errors, but I would actually see Barbara and the kids again and even sleep in my own bed that night.

The incident reminds me of yet another adage that a friend used to quote. “God takes care of fools and children.” Amen! And I say that sincerely, even though it’s clear which category I fall into.

I realize that this whole incident raises an ethical question. It goes something like this: “You mean to say that God took time out from running the universe and looking after seven billion other people just to get you out of that mud hole? And if He did that, why didn’t He help those poor souls on the Uyuni Salt Flats? Who do you think you are anyway?”

Exactly. Who am I? And who are you? And what does God think about us anyway?

Well, according to Genesis, God made you, me and our seven billion fellow humans in His very own image. He formed Adam from the dust of the ground and breathed His Spirit into the man’s nostrils. Later He fashioned Adam’s lovely wife from a rib bone. Sounds very much like hands-on treatment to me.

Jesus confirmed that God is still very hands-on when it comes to each man and woman. Perhaps you have read his comment about God taking note of every sparrow that falls from the sky, adding that He is infinitely more invested in men and women than sparrows. “Why, even the hairs of your head are all numbered!” Jesus says to drive home the point.

So when I ponder whether or not God got us out of that mud hole, I start thinking about the coincidences. Was it mere coincidence, for instance, that Bentley took his sons ice climbing the same day we scaled Tunari? Was it a coincidence that Leonie suggested walking home just when she did? What if a car or bus had come along the cobblestone road and picked up our trio of ladies before they connected with Bentley. The fact that none did was another lucky coincidence.

I could go on, but you get the picture. It reminds me of yet another old adage. “Coincidence is God’s way of remaining anonymous.”

I don’t expect to supply all the answers to thorny ethical questions from this one episode of mud hole deliverance. I simply hope for one thing for you, dear friend. Whenever you are in a real predicament, one that you are never going to get through on your own, a real mess that makes you wonder if you will ever see home again, I hope that God grants you one of those Bentley afternoons. 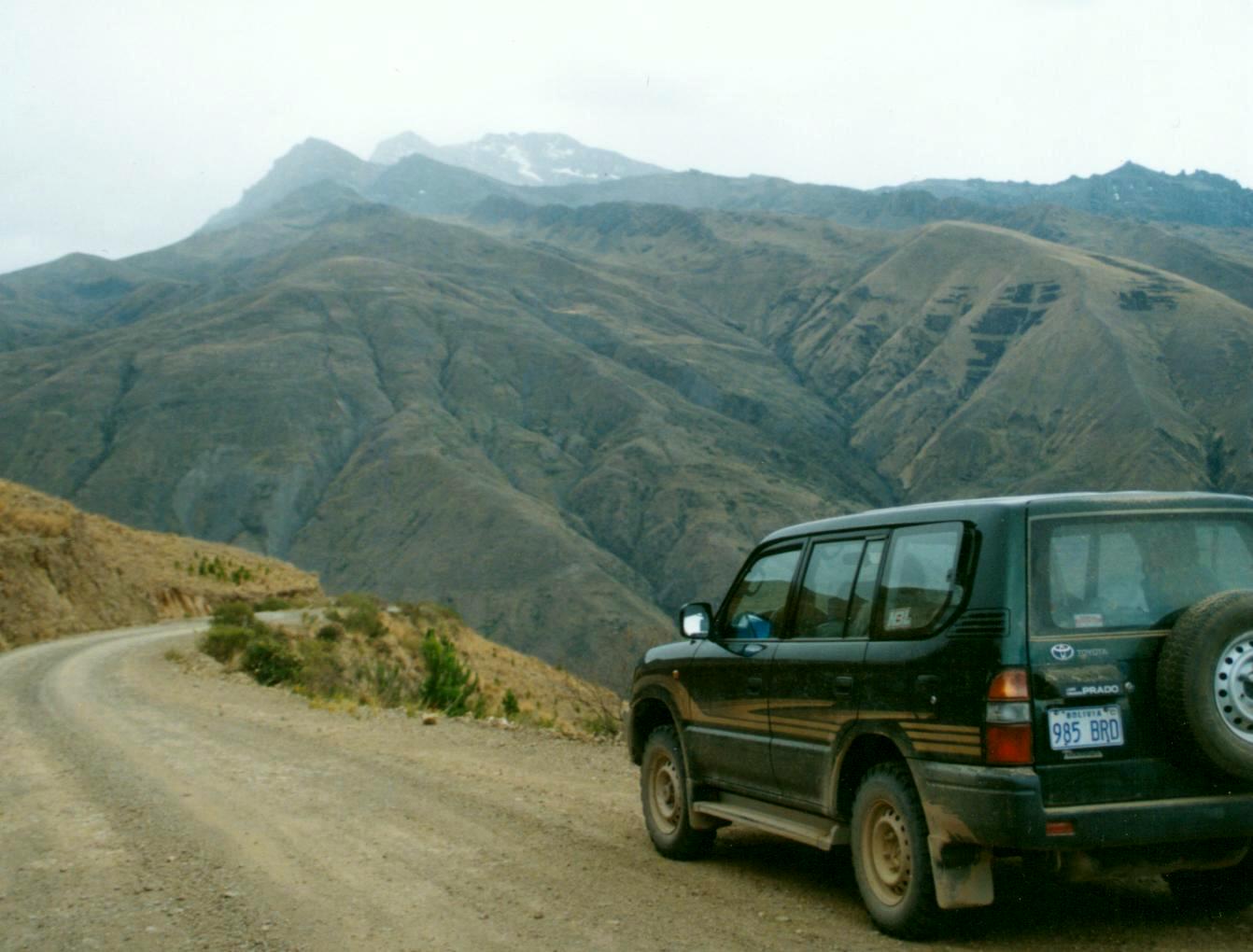 Next time: No joke.