The road drops several thousand feet over a relatively short distance from the Central Highlands of Chiapas, Mexico, to the Guatemala border below. I confess I don’t recall a lot about this leg of the trip, but our son Ben does. He recently shared this page from his diary describing that day’s drive. 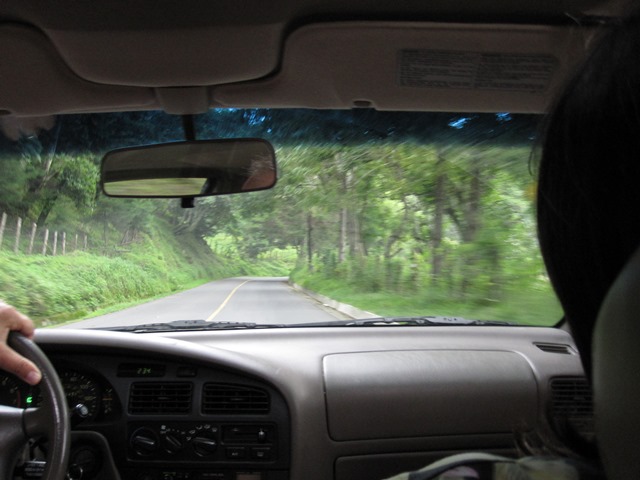 We follow a river through dense forestation, wild flowers and thick greens engulfing the narrow road in deep shade. Then suddenly a spot opens on the side of the road and we can see the thousand-foot plunge to the water below. We climb and climb, snaking up steep grades, then descend in controlled chaos, like a pinball making its way down an obstacle course.

As if this were not enough, we have to contend with the most brutal speed bumps known to humanity. Mexicans call them topes, Guatemalans know them as tumulos. These are not the only inconsistencies. One town has planted fortresses in the middle of the road. Other bumps have been worn down to near oblivion. Some are painted hues of yellow that warn of their severity, others are camouflaged in shady spots to deliver harsh blows to the bottom of cars. We must have gone over 200 or more of these things in less than 60 miles.

We suffered some snags at the border crossing and night fell before we entered Guatemala. Under the cover of darkness it was impossible to discover these rough hurdles until an instant before plowing into them. Brakes squealed in attempts to prevent us from separating the chassis from the rest of our overfilled auto. The ride was a rollercoaster, and how we emerged at the other end with no flat tires and all parts of the Camry still intact is a miracle to me.

[Editor’s note: This is an abridged version of Ben’s diary page. I confess to deleting some of the more, um, startling parts.] 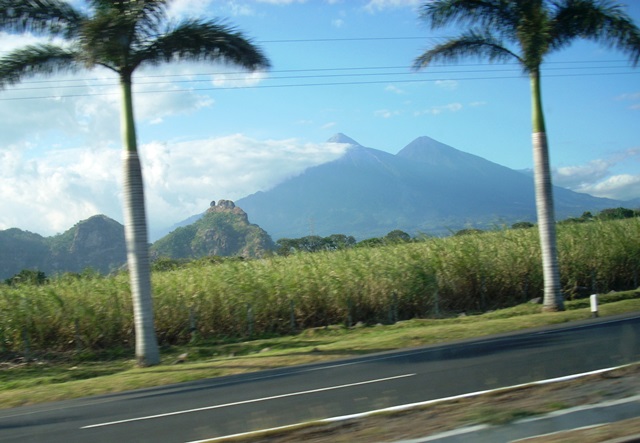 His mention of “some snags at the border crossing” deserves elaboration. If you should ever make a trip like this, you might encounter pleasant, smiling young men on the side of the road offering to help you navigate a border crossing for a small fee. Never, NEVER under any circumstances, accept their “help”.

I cannot for the life of me remember why I did. Maybe my nerves were still jangling from the startling descent from the Chiapas Highlands and left me jittery about what lay ahead. Maybe I was in a generous mood and keen to give enterprising youth some honest employment. Maybe I just momentarily lost contact with reality, which is undoubtedly the real reason.

Every seasoned traveler knows that these pleasant young men do not seek honest employment, nor do they render help to the poor dupes they manage to bamboozle. They are, in fact, the world’s most effective rip-off artists and you should treat them as such. Do not speak to them, do not make eye contact, and DO NOT give them anything, not even the time of day.

Me, well I gave them everything they asked for: their entire fee, in advance, and our passports, smiling pleasantly all the while.

As I said, I had momentarily lost contact with reality.

The pair disappeared into the line of waiting vehicles and did not reappear until two hours later. They explained in hushed tones that a problem had arisen and they needed more money. If we wanted to proceed into Guatemala or ever see our passports again, we would have to fork over more cash.

I won’t recount all the disgusting details about what happened next. You only need know that a border crossing that should have taken us 20 minutes stretched into more than six hours and sucked up about 10 times the standard fees. Needless to say, nobody was smiling when it was over.

But we did finally enter Guatemala, at night, and made our way over a dark highway riddled with maddening tumulos, now invisible to the naked eye, to a modest motel where we fell into bed with no supper.

But the next morning dawned bright and sunny. We greeted a group of friends from Florida who were staying at the same modest motel. Then we were off on our way across Guatemala, the land of volcanoes.

It seemed that we were never out of sight of a perfect, conical peak on the horizon the entire time we traveled through the country. Just as one picture-perfect volcano passed out of view behind us, another magnificent specimen appeared in the windshield.

Yet there was one stretch when the volcanoes disappeared altogether, as we climbed through thick clouds up to Lake Atitlan. The fog was so dense we could barely see the roadside until we emerged in the dusky sun to see Atitlan itself, said to be the world’s most beautiful crater lake. And yes, it is ringed with volcanoes. 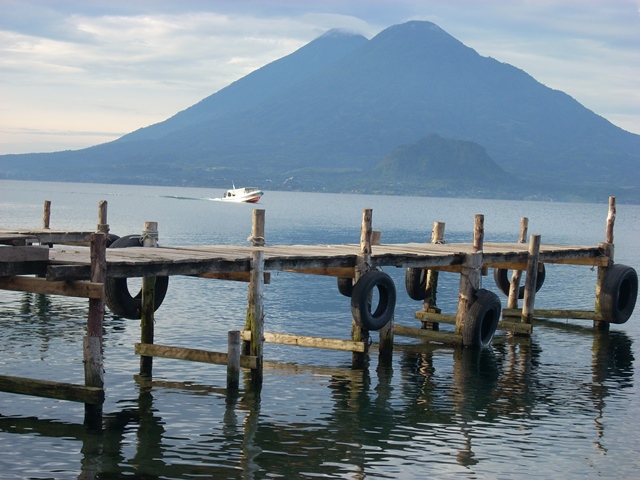 During our visit there, Barbara took an excursion across the lake with Benjamin to visit an innovative school his college buddies had told him about. The trip took most of a day, the only way to get there being by boat. Much of the entire north shore of Atitlan is inaccessible by road due to the volcanoes.

If Atitlan is one of the world’s most beautiful lakes, then Antigua is certainly one of its most beautiful cities. Nestled in the enchanting Ponchoy Valley, Santiago of the Knights of Saint James, the town’s official name when founded in 1543, served for two centuries as the seat of Spanish Guatemala, a colony that included all of present-day Central America and the Mexican state of Chiapas. 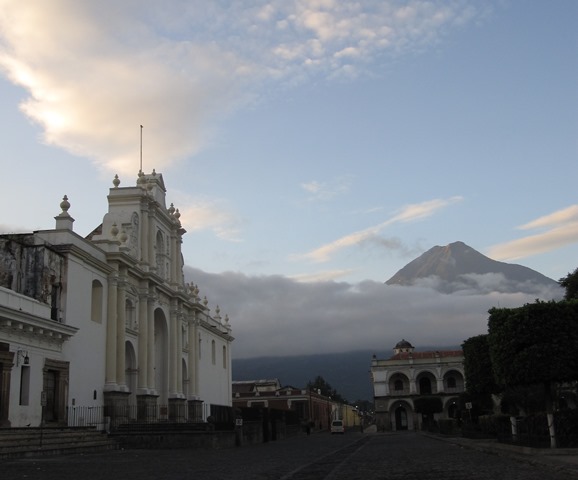 It was not the colony’s first capital city. That one was buried by volcanic debris from the nearby Volcán de Fuego (Volcano of Fire). Antigua was positioned outside the reach of these destructive “lahar” flows, but nevertheless suffered devastating earthquakes with alarming regularity. The legacy of these tremors is recorded in Antigua’s architecture, mainly in the six-feet-thick masonry walls of its colonial era buildings.

Following a particularly destructive quake, Antigua finally had to relinquish its status as the seat of government to a city built on safer ground and christened New Guatemala, the present-day Guatemala City.

Guatemala is the largest country in Central America by population (18.3 million), of which nearly half (43.43% to be exact) are of native Mayan or Xinca descent. And while Spanish is Guatemala’s official tongue, 42 different languages are spoken within its borders. It is Central America’s most indigenous country.

We believe that is why Guatemala feels so familiar to us, because we reside in South America’s most indigenous country, Bolivia. Indigenous peoples comprise 36.8% of its population and speak 36 different languages. We concede that Bolivia boasts far fewer volcanoes. However the largest of them, Sajama, rises to 21,463 feet, the highest point in the country. Ah well, enough competitive banter.

Although Roman Catholicism has been the dominant religion in Guatemala since the arrival of Europeans, as is true in all Spanish America, the spiritual environment of the country has changed considerably since the first evangelical Protestant missionary arrived in 1882. For example:

> One in four Guatemalans today professes to be a born-again Christian, making it one of the countries with the highest percentages of evangelical Jesus followers in all Latin America.

> Aided by several new translations of the Bible into indigenous languages, church-planting movements are thriving among ethnic Mayan peoples.

> The nation-wide Evangelical Alliance calculates that there are more than 40,000 churches in Guatemala. If this statistic is correct, it means there are 96 evangelical congregations to every one Catholic parish in the country.

> The Christian Fraternity of Guatemala, commonly known as the Mega Frater Church, has seen its attendance grow from 20 at its founding in 1979 to more than 20,000 today. It is the largest Pentecostal congregation in Guatemala and meets in one of the largest church buildings in the world.

> Two past presidents, Efraín Ríos Montt and Jorge Serrano, were outspoken about their evangelical faith while in office. Both generated political crises that forced them to step down before completing full terms.

> Researchers report that Guatemala’s Roman Catholics and evangelical Protestants share their faith more than citizens of any other country of Latin America.

> Explosive growth of the Orthodox Church is taking place among the ethnic Mayan peoples, prompting bishops to migrate there from Eastern Europe.

Such is the complex, dynamic, unpredictable growth of Christianity in this culturally diverse nation. And though I still feel Guatemala seems a familiar place to me, I confess that these developments among its followers of Jesus are, to put it mildly, surprising.

Perhaps such surprising developments stem from Guatemala’s vast cultural diversity, or its intricate social fabric. Maybe economic imbalances have triggered unexpected results. Yet, I suspect it might have something to do with geography.

After all, if you stop to think about it, your approach to life and God and eternal destiny just has to take on a heightened sense of urgency when you live among volcanoes. 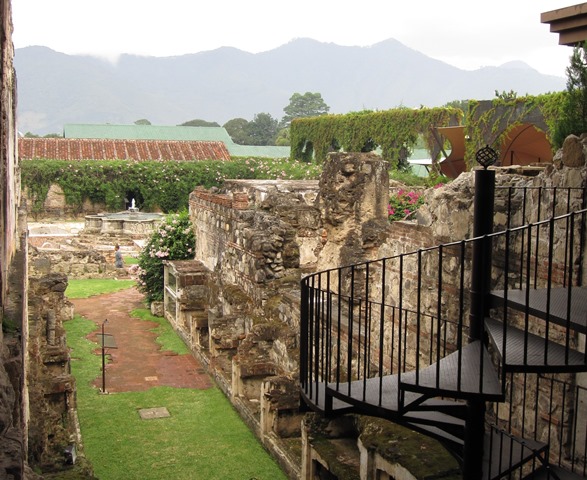 Next time: Land of The Savior