The land of the Savior

At the border crossing between Guatemala and El Salvador an immigration official confused Ben with Molly. Which was which? she demanded to know, glancing between the photos in their passports and the two look-alike siblings standing before her. 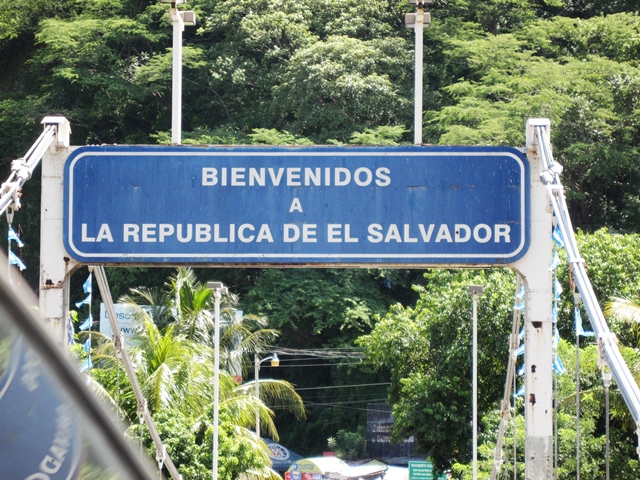 Our kids’ hairstyles triggered her puzzlement. Ben wore long, thick dreadlocks cultivated during his college years. Molly, on the other hand, had shorn her luxurious blond tresses and sported the GI Jane look. She claimed the new style attracted less unwelcome attention from strangers and would be easy to groom during months of travel through the tropics.

It took some earnest explanation to convince the suspicious border official that the youth before her with the masculine haircut was feminine and the other with hair spilling to the shoulders was a young man, and that neither was trying to disguise his or her identity. With a weary sigh, the officer stamped entry visas into their passports.

My memory may fail me here, but I don’t recall hearing the customary “Welcome to El Salvador” as she pushed the documents across her desk at us.

Welcome to El Salvador. In English, “The Savior,” a country literally named for Jesus.

Any nation that carries such a title would be hard-pressed to live up to its name. El Salvador tries, and fails, like every earthly nation will, to achieve the standards of justice, peace and happiness that its Namesake established for His Kingdom (see Romans 14.17). It dreams, like all nations do, of one day achieving something great.

Granted, El Salvador is not great in the territorial sense. It has been dubbed the “Tom Thumb of the Americas.” The country measures only 170 miles from east to west and 90 miles north to south. It is smaller than every state in the U.S.A. except Connecticut, Delaware and Rhode Island. 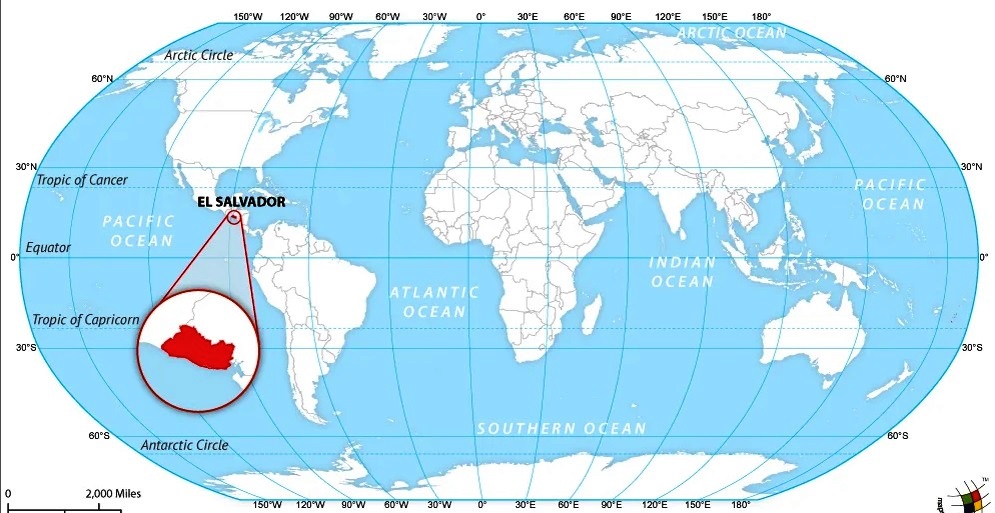 Personally, I think of El Salvador as the Mighty Mite of Latin America. It exerts a regional influence much greater than would be expected of a nation-state its size, thanks to its skilled labor force, strategic geographical position and diversified economy. A business-friendly economic environment has created innovative homegrown enterprises and attracted multinational companies. The country maintains the second highest level of income equality in Latin America, a key factor in sustaining a stable middle class.

These benefits have not come without pain and suffering. Along with the rest of Central America, El Salvador won independence from Spain in 1821 and, like much of the region, endured political instability and social inequality for the next century and a half. Persistent unrest finally led to a 12-year civil war, which erupted full-scale on March 24, 1980, when a right-wing death squad shot and killed popular Archbishop Oscar Romero as he was saying Mass at the altar of a church.

By 1992, when President Alfredo Cristiani and the commanders of five guerrilla armies signed a peace treaty at Chapultepec Castle in Mexico, more than 75,000 Salvadorans had perished. Thousands more had been “disappeared” by brutal death squads. The Chapultepec Peace Accords effectively ended the vicious cycle of violence and established a multiparty constitutional republic. Salvadorans found grace to bury the hatchet and embrace national reconciliation. The country rebounded from the ravages of war in remarkable fashion.

When we arrived in the capital city of San Salvador we received the warmest of welcomes from our hostess, Suzy Garcia, and her family. Business owners and active members of an evangelical church, they hosted us with kind and casual hospitality for the week we spent in their home.

As any proud Salvadoran would, Suzy immediately served up pupusas. If you have never had the pleasure, you might have a hard time imagining the pupusa, or comprehending the passion this delicacy inspires in Salvadorans. You take a thick, puffy tortilla, split it lengthways and stuff it with salty cheese, chicharron (crispy fried meat), squash, refried beans, buds of the loroco plant, or all of the above.

Pupusas are typically served with tomato salsa and curtido, a cross between German sauerkraut and Korean kimchi. The Pilpil people who invented the pupusa consider it sinful to cut tortillas with a knife, so Salvadorans are careful to eat their national dish with the fingers. They have also declared every second Sunday of November “National Pupusa Day.”

When it comes to food, it doesn’t get any more passionate than this. 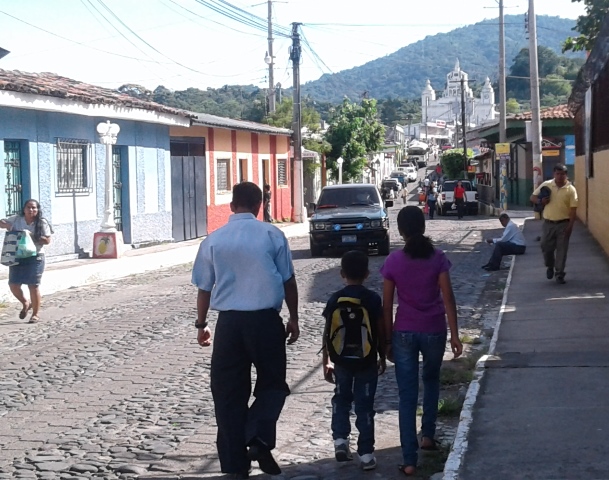 Our 2009 visit was not the first time Suzy and family hosted the Millers. Ben had spent a week at the Garcia home the previous year while conducting research for his college senior thesis. His investigation focused on El Salvador’s current national tragedy: violent crime perpetrated by the Mara Salvatrucha.

Ben briefed us on the history of the notorious criminal gang. Details of the story surprised us. Foremost is that Mara Salvatrucha, an also known as M-13, was made in the U.S.A.

The newcomers found Los Angeles particularly inhospitable. The city’s outlaw gangs made life harsh for the immigrants, to the point that young Salvadoran men found it necessary to organize their own gang to protect themselves and their families.

They chose the name “Mara,” some observers say, as homage to La Mara Street in San Salvador. “Salvatrucha,” it is believed, is a combination of “Salvadoran” and “trucha,” a word that means “be alert” in the Caliche slang spoken in the country.

Regardless of where the name came from, it inspires general fear and revulsion in El Salvador, Guatemala and Honduras, countries where the gang primarily operates.

Following the end of the civil war, gang members returned to El Salvador in quantity. Some came by choice. Others arrived after being arrested for crimes committed in the U.S. and summarily deported. Once back in Central America, Mara Salvatrucha began to build wealth through extortion and murder, soliciting “protection money” from local business owners. Those who refused to pay risked death.

On our way through Guatemala City we saw a newspaper report about a driver and his assistant dragged off their public bus and assassinated in front of the passengers. The bus owner had not paid protection money. The newspaper report noted that, in the first eight months of that year, 157 bus drivers and conductors had been similarly murdered.

It so happened that the large evangelical church we visited on our one Sunday in San Salvador was holding its inaugural service in a new downtown sanctuary. The congregation had relocated to the heart of the city from its original neighborhood under duress, so the celebration was tinged with certain melancholy.

The pastor told us that, for years the church had operated a bus for parishioners who needed a ride to worship services. The gang demanded protection money for the bus to continue its route through its turf. When the money was not forthcoming, gang members waylaid the bus and held up passengers at gunpoint, twice. Ridership plummeted.

“I went to the Mara commander and asked him to give us a break,” the pastor said. “’After all, we are a church,’ I told him. ‘We don't charge a fare. In fact, it costs us to operate the bus.’”

“He answered with a shrug. ‘Sorry, can’t do that. If I let you off the hook, my superiors will simply kill me and put somebody else in my place. I will be dead and you will still have to pay.’”

Mara members become well acquainted with violence, beginning with initiation into the gang. When they agree to join, recruits endure a vicious pummeling by veteran members. The excruciating welcome serves to test their loyalty and seal their bond with fellow Maras. It must work. Few gang members abandon the ranks once initiated.

In actual fact, loyalty is strictly enforced by the threat of death. The gang insists on lifetime commitment and exterminates those who leave early. Ben learned that gang rules allow only two acceptable motives for resigning: marriage and religious conversion.

“We respect just two things in this world, God and family,” gang leaders profess. So, if a member wishes to depart to start a family, he may do so. However, the gang monitors his behavior and if he cheats on his wife or abandons her, he is killed.

Should a Mara profess Jesus as Savior, he can also petition for discharge. If his testimony appears genuine to the Mara leadership, permission is granted. Again, the gang remains watchful. Should the convert backslide, say by forsaking worship services or going on a drinking binge, he is killed.

I have had the privilege to know some true heroes of the Faith in my time. I met several of them in El Salvador. The men and women who risk their lives every day to make disciples of Jesus among the Mara Salvatrucha and its rival gang, Barrio 18, are that class of heroes. 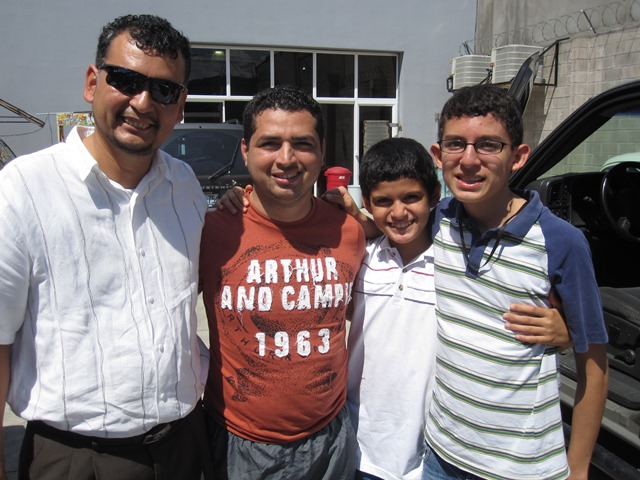 Ben became acquainted with gang evangelists while doing his research thesis and introduced us to some of them. One remarkable young man had recently moved his wife and children from Los Angeles to San Salvador in answer to God’s call. Another gospel worker, Saul, is a chaplain and educator in a prison populated by Mara inmates. Abner, one of his colleagues, was shot and killed by the gang three weeks after we made his acquaintance.

While writing this blog, news about gang activity in El Salvador appeared on the BBC. The most alarming story reported that 62 persons were killed, allegedly at the hands of MS-13 and Barrio 18. This happened in a single day, Saturday, March 26. Ominously, it was the most violent 24-hour period in the country since the end of the civil war in 1992.

The victims included the pastor of an evangelical church in San Matias who was gunned down in front of his young son. The motive of the shooting was unknown at press time.

The BBC also carried a video report* about another evangelical pastor. Entitled “God or the gang,” it documents the work of Will Gomez, a gang member turned Jesus-follower. He leads Eben-ezer, a church full of men and women who have left gang life to serve God.

“The gangs know what we believe, they follow what we do,” Gomez says on camera.

So far, the line of respect has shielded Pastor Gomez and his flock from gang attacks. He estimated that 50 men had passed through his rehab program since it was first established. Of those, 30 have remained faithful to the Lord. Of those who did not, five are now dead.

As expected, loyalty was strictly enforced.

Welcome to El Salvador, a land of suffering and beauty, tragedy and promise, conflict and joy. A land where, every day, people make choices that lead to life or death.

Welcome to a land not so much different than your own. 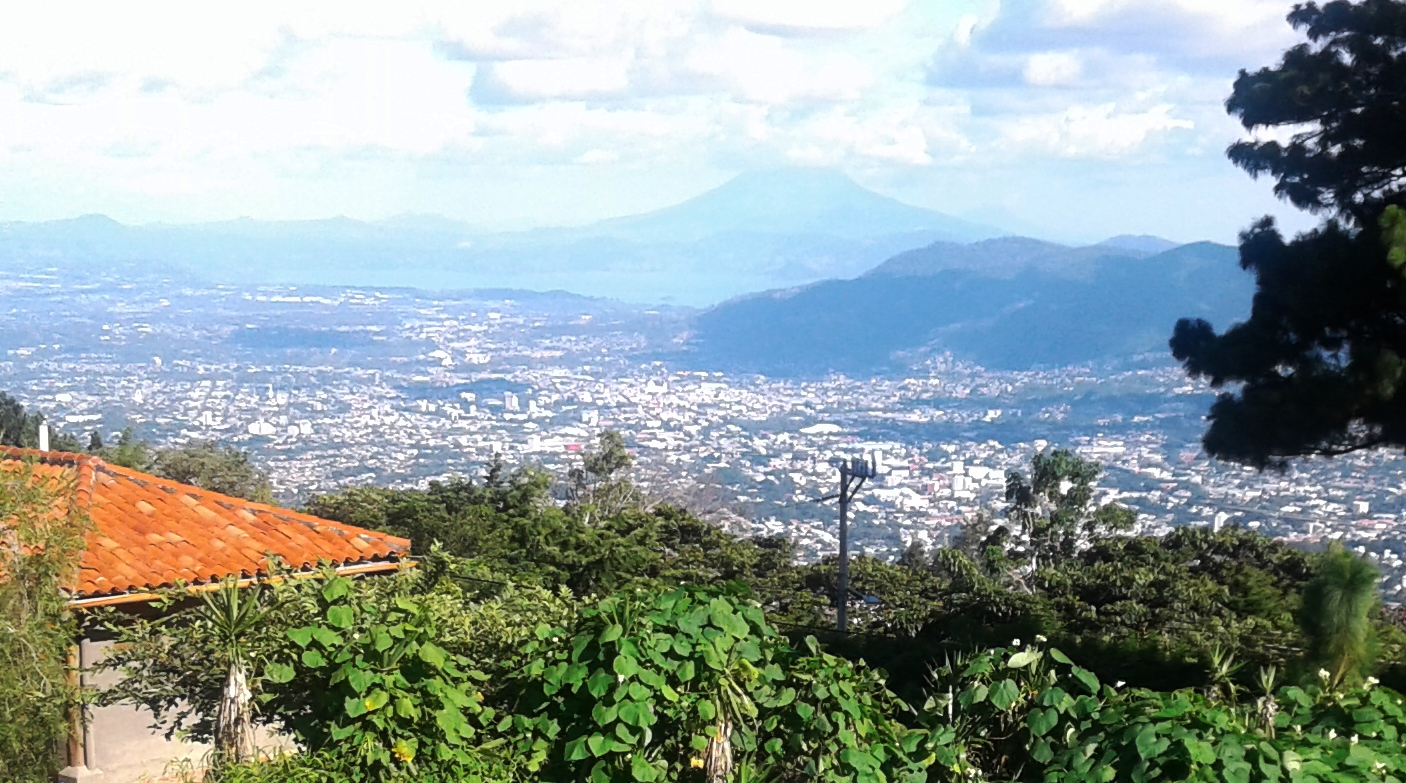