Pearl of the Caribbean 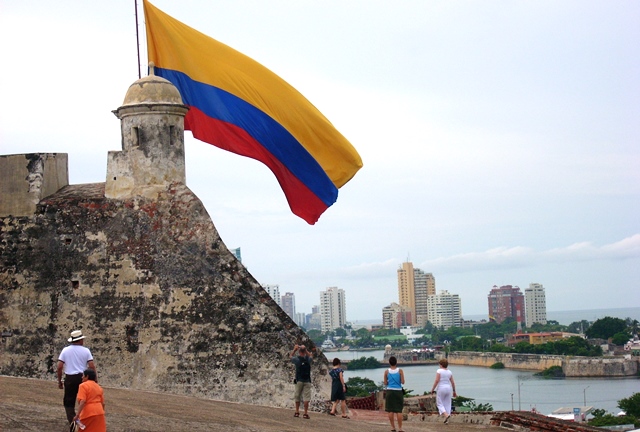 Travelers have three options to get from Panama to Colombia. You can fly from Panama City, a brief, up-and-down hop. Or you can go by water on a private sailboat from Colón, which is not brief. The trip typically takes a month, allowing for stops on the San Blas islands for sunbathing and diving. Finally, you can travel by land through the Darien Gap.

Well really, there are only two options because sane people who love life never attempt to cross the Darien Gap. Its 60 miles of tortuous jungle and swamp is infested by deadly snakes, lethal insects, predatory animals, drug traffickers and guerillas. [Editor’s note: we are not talking gorillas here, like you see in Tarzan movies, but guerrillas, as in armed outlaws that shoot travelers or kidnap them for ransom, or both.]

We once saw a documentary film about Arthur Blessitt, a man who in literal obedience to Jesus’ command to take up his cross trekked across every country of the world, dragging a wooden cross that once hung in his church in Hollywood.

The movie showed clips of Blessitt at different points in his 43,000 mile journey traversing barren deserts and frozen mountain ranges. He walked across big cities and perilous war zones. Once, in obedience to Jesus, he crossed a No Man's Land between the Israeli army and the PLO to pray with Yasser Arafat. In short, Blessitt did some crazy stuff.

At one point in the documentary, the interviewer asks, “Arthur, in all your travels, when did you most fear for your life?”

Blessitt’s expression clouds over and he says, almost in a whisper, “Crossing the Darien Gap. I was sure that I was going to die there.”

Our policy on the Epic was to avoid death whenever possible. A month on the water offered little appeal for one prone to debilitating seasickness as I am. Instead, we opted for the short flight from Panama City. It took us to Cartagena, the Pearl of the Caribbean. 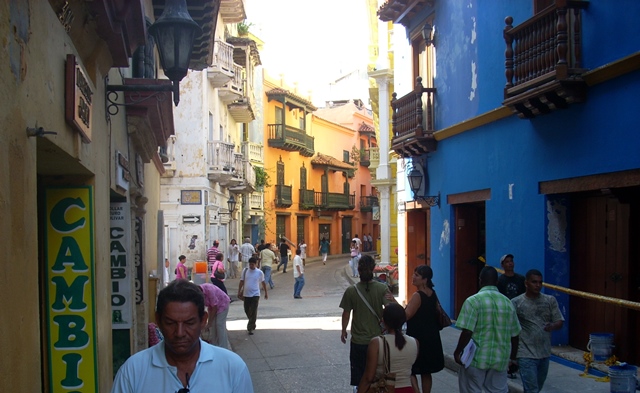 Nearly 500 years old, Cartagena is a treasure for several reasons. Strategically located on the north coast of South America, it became imperial Spain’s preferred port for shipping silver mined in the Andes Mountains to Europe. The trade generated enormous wealth for Cartagena’s citizens, who built charming colonial homes, ornate churches and stately public buildings that grace the city center to this day.

The wealth, in turn, made Cartagena a primary target of pirates and British warships. Cartagena endured frequent sieges and naval bombardments by enemies intent on capturing The Pearl. 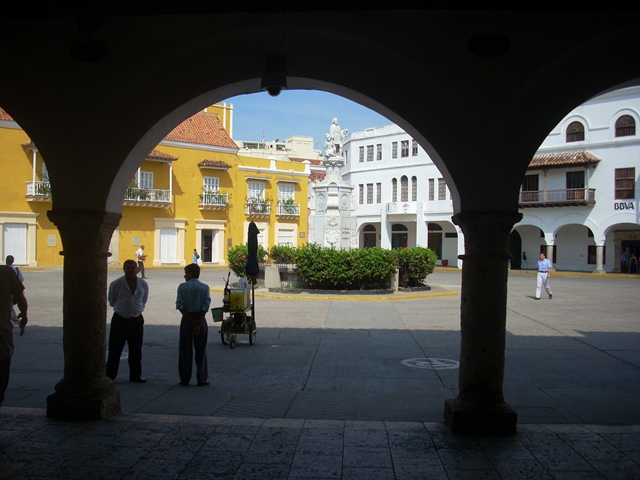 A visit to Cartagena should include some hours spent at San Felipe de Barajas, a massive stone fortress with a commanding view of the harbor and a labyrinth of underground tunnels. It stands as a monument to the centuries of assault and resistance.

The toughest challenge came in 1741, when an armada of 180 ships and 25,600 men under the command of Admiral Edward Vernon laid siege to Cartagena during one of several wars between Britain and Spain. Despite his formidable force, Vernon’s assault on San Felipe de Barajas failed, leaving 800 British dead and another 1,000 taken prisoner. The defeated admiral lifted the siege and withdrew, thus ending what proved to be the last attempt by a foreign power to conquer The Pearl.

The battle produced an interesting historical footnote. Vernon had recruited 2,000 infantrymen from England’s North American colonies. Among them was a young man named Lawrence Washington. When he returned home from the war, Washington named his Virginia estate in honor of his commanding officer. Mount Vernon, later the home of Lawrence’s famous half-brother George, thus became a kind of testament to the battle for Cartagena. 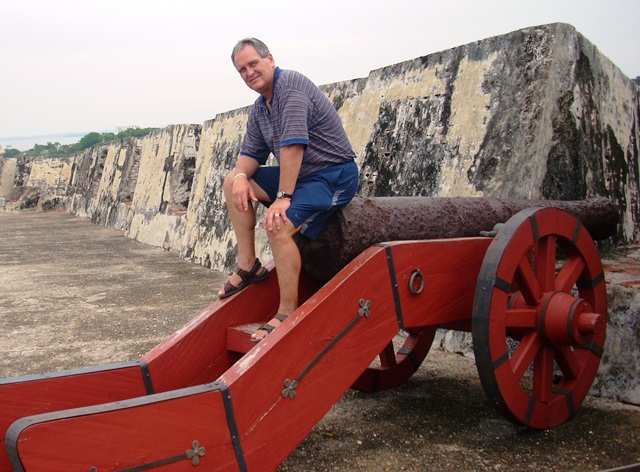 For myself, I consider Cartagena a pearl because it is the historic gateway to one of the finest countries in the world, a place of beauty, fascination and paradox. Rather than expound on the many charms of Colombia to describe its allure, or try to explain its perplexing paradox, I will share this fanciful legend that Colombians invented about their homeland.

In the days of creation, God announced to the angels that He was going to create a very special country. “This is how it will be,” He said. “Two oceans, the balmy Caribbean and the mighty Pacific, will bathe its shores. The heavens will provide warm winds and abundant rainfall, so that it will never know ice or snow or drought. I shall fashion a great, tropical plain in the east, where immense herds of cattle will graze. In the west, broad rivers will flow between verdant mountain ranges. Rich soils shall produce all manner of good food, as well as the world's finest coffee. The forests will shelter myriad species of animals and exotic birds. Under the ground I shall sow petroleum, precious metals and emeralds. The name of this special country shall be called ‘Colombia.’”

The astonished angels gasped. “Lord, such a land will truly be a paradise. But what of the countries round about? They will be jealous of Colombia and say that you were not fair to favor it so.”

“I shall be fair,” God replied, “because I shall populate this special country with...Colombians.”

My Colombians friends share this tongue-in-cheek story about themselves when discussing their nation’s penchant for violence. During the past century, Colombia developed a reputation as one of the world’s most dangerous countries. In the 1980s and ‘90s, it suffered the highest homicide rate in the Americas, 15 times that of the United States. The country was home to the planet’s most ruthless drug cartels and criminal gangs.

Theories abound to explain why this was, but none are ultimately convincing because Colombians are a truly amiable people. Among Latin Americans known for warm and gracious manners, Colombians are the warmest and most gracious.

A friend whose husband was posted to Venezuela with the British Foreign Office spent several holidays in Cartagena and fell in love with Colombia. She once told me, “I really don't think I would mind if a Colombian shot me dead because he would be so nice about it.”

Certainly history has played a part in creating the violence. In 1948, an assassin shot dead the popular politician Jorge Gaitán in broad daylight on a busy Bogotá street. The callous murder sparked a bloody struggle between the country’s two principal political parties. La Violencia, as this dark chapter in Colombia’s history came to be known, claimed an estimated 200,000 lives. Most died at the hands of partisan militias who roved the countryside at will, robbing and killing innocent civilians.

Politicians finally compromised and La Violencia subsided in the 1960s, but not before spawning the formation of left-leaning guerrilla armies such as the Revolutionary Armed Forces of Colombia (FARC) and the National Liberation Army (ELN). Together they carried on the longest running insurrection (52 years) in Latin American history.

Conflict can produce great men and women. Colombia has had its full share of both. After two days in Cartagena, we carried on to the town of Sincelejo to visit one of them. Our son Ben refers to him as the Gandhi of Colombia. 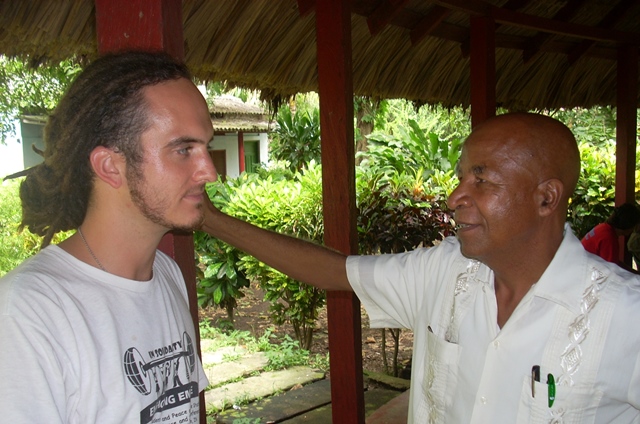 Ricardo Esquivia was born and raised during La Violencia. When he was nine years old, his father entered a leprosarium. Ricardo enrolled in a nearby boarding school operated by Mennonite missionaries.

At age 13, Ricardo confessed faith in Christ and was baptized. By the time he entered high school, he had developed a clear idea about his life's work. He was to help change unjust circumstances. He believed he could best fulfill that calling by becoming a lawyer.

In 1983 he left a lucrative law practice in Bogotá and moved his young family north to the Caribbean coast. His reason: to help change the circumstances of poorly paid and excessively exploited farm workers.

Esquivia’s work was exhausting and dangerous. Once, police arrested one of his clients, the leader of a farmers union in San Jacinto. Two days later the man’s body was found riddled with nearly 50 bullets. He left behind a wife and four children.

Ricardo’s work turned yet more dangerous when ELN rebels began infiltrating the farmers unions. One night 60 soldiers broke into the Esquivia home and arrested Ricardo. Although he was released unharmed, he knew it was just a matter of time before his bullet riddled body would be found somewhere. He moved his family back to Bogotá.

I first met Ricardo in 1990 when he was working to introduce an article to Colombia’s new constitution that would allow for alternative service to the country’s compulsory military draft. He saw the measure as step toward reducing the cycle of violence that plagued Colombia.

“The military teaches young men to kill,” he explained to me. “When they leave the army, some join the rebel groups or right-wing paramilitaries. Others accept lucrative jobs with the drug cartels.”

“We believe that if we can offer young men an alternative to this lifestyle, it will help to break Colombia’s cycle of violence.”

When we caught up with Ricardo Esquivia in Sincelejo years later, he was again living on the north coast, working to break Colombia’s cycle of violence. We were privileged to witness him in action, changing the result of unjust circumstances.

The case involved about two dozen farm families. One day right-wing paramilitaries invaded their small isolated community and forced everybody to gather in the village plaza.

“We know you are rebel sympathizers,” the militiamen falsely claimed. Then they chose two men from the crowd and shot them dead.

“The rest of you have 24 hours to clear out, or the same thing will happen to you,” they declared before leaving.

The stunned villagers buried the dead men and left as ordered. The paramilitaries later returned to burn down their houses and confiscate their livestock and crops.

Ricardo had arranged a day-long seminar with the displaced farmers. We listened in rapt attention as they expressed their anger at the injustice, reckoned their losses and discussed what they were going to do.

Ricardo patiently led them through the alternatives. One, they could buy guns and go after the culprits. No, they decided after some discussion, that would only bring more death. The cycle of violence would go on like a revolving door.

Two, they could bring a court case to bring the culprits to justice and regain their land. This would be a risky venture, with no guarantee of a satisfactory result. It was common knowledge that militia groups operated with the tacit support of wealthy businessmen and politicians in Bogotá.

Three, they could plant yams. Ricardo told them about “Sowing Peace,” a project to help victims of these attacks recover economically. Sowing Peace would provide them a plot of land and seed. Once the crop was ready, wholesalers would buy their yams for export to Africa.

By this time it was late in the afternoon. The tense and combative atmosphere of the morning had settled into a reasoned acceptance of non-violent options. The families voted to plant yams.

Reflecting on this incident, it occurred to me that it had taken place quite close to Cartagena, practically in The Pearl’s backyard. Tourists who come to admire San Felipe de Barajas, the fortress so formidable in repelling foreign enemies, could scarcely imagine the domestic turmoil occurring a few miles inland. Talk about a paradox.

The good news today is that violence is trending downward in Colombia. The country’s homicide rate has plummeted since the 1990s. Peace treaties have been signed with guerrilla armies. Travelers no longer risk being kidnapped or shot when traveling the countryside. International tourists are once again discovering the beauty and fascination of Colombia.

I reckon that one reason Colombia is enjoying greater peace is because Ricardo Esquivia answered God’s call in high school. Perhaps his seminar that day in Sincelejo was but a minor victory in the battle to break the cycle of violence. Nonetheless, persistent minor victories brought about by faithful men and women can absolutely change circumstances. 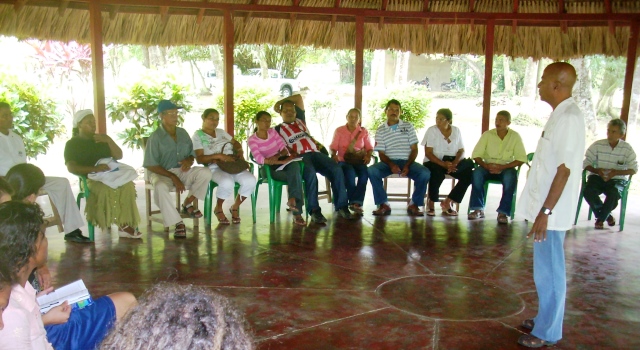